Dinner tonight was one of those instances where I was in a rush and admittedly lacking a plan.  I stood with the refrigerator door open hunting for ingredients.  I came across spinach and bacon and the lightbulb went off.  I had a flashback of a classic restaurant salad that I have avoided for years because it is usually made with pork bacon.  I decided to take a stab at adapting it to be Maximized Living “approved” and it turned out fabulously.  It has the crunch of the turkey bacon and the sweet and sour tang of the dressing which makes it a perfect adaptation of the original. 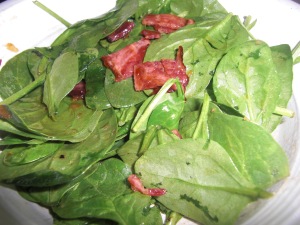 Put the spinach (and optional vegetables if desired) in a large bowl.  Fry the bacon in the grapeseed oil until crisp. Remove, drain on paper towels and chop.  Keep the leftover oil in the pan and cook the onion in the fat for 2-3 minutes, and then add the garlic – cook for 15-30 seconds but DO NOT let the garlic brown.  Add the vinegar, and scrape up the brown bits in the pan. Add the salt, pepper, and xylitol. Stir to dissolve, and pour the dressing over the spinach.  Top with the chopped bacon.

Wife, Mom, Daughter, Business Owner with a Passion for Cooking and Eating Healthy Food and Helping Others to do the Same! View all posts by Kimberly Roberto